Stratford’s work with The Royal College featured in OBJ 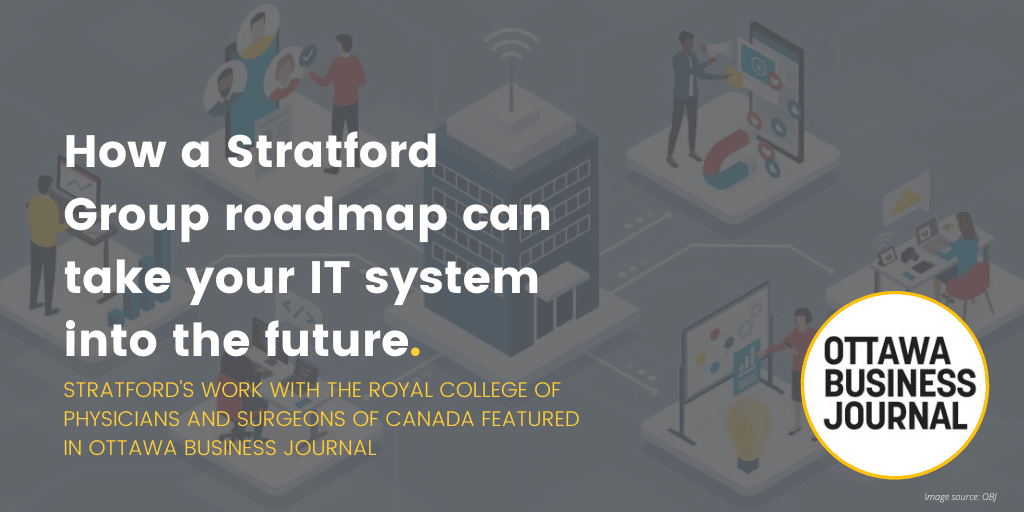 Like everyone else, when the pandemic hit in early 2020, the Royal College  of Physicians and Surgeons of Canada (the Royal College) had to update its IT ecosystem faster than expected during a time of upheaval and uncertainty.

Tim Julien is executive director, CFO and COO of the Royal College. He and other senior leaders knew the Royal College needed an IT ecosystem that could meet the increased demand for collaboration across the country while also improving their members’ experience. Enter Stratford’s Management Consulting team, led by Vice President, Digital Strategy & Delivery, AJ Harris.

Harris’ work with the Royal College was recently profiled in the Ottawa Business Journal. The article goes into detail about the 2021 IT operational assessment and ongoing implementation resulting from it.

So far, the Royal College has implemented 60-70% of the 29 recommendations from the roadmap Stratford provided. “We wouldn’t undertake something of this magnitude to just shelve the review and carry on,” said Julien. “It’s an organic and living document we’ll consult until we’ve addressed everything that’s in that report. It’s a marathon, not a race.”

On the ground, change management looks different for every organization.

That’s why Stratford calls the report a roadmap. They prioritize their recommendations, explaining which has to happen first in order to move to the next. One of the first recommendations for the Royal College was strengthening the IT team. “They helped us identify key roles needed to enhance the department, and when it came time to recruit an IT director, they developed a leadership profile we used for the recruiting campaign,” said Julien.

All of this may sound complicated, but the fact is change is never simple. That’s why Harris says the time you invest in change management should be equal to the amount of effort you invest in configuring a new system. “You’re not trying to prevent resistance, you’re putting in tools to deal with it,” he said.

So far, the response to the changes has been enthusiastic. “The IT team and staff are looking forward to delivering a state-of-the-art digital experience to physician members, and excited about the new possibilities that lie ahead,” said Julien. “With a renewed emphasis on change management and training, people feel supported as we continue to roll out the roadmap.”

In a world defined by constant change, having a Stratford roadmap to help navigate some of the choppy waters sounds like the right idea.

TALK TO US TODAY